Bricco Suites is perfectly located Boston’s iconic 2.5 mile-Freedom Trail which connects 16 nationally significant historic sites, each one an authentic treasure. Thanks to preservation efforts, these cultural assets are still intact, which makes Boston truly unique as one of the few places in America to experience the actual sites and learn the history they tell while walking through modern city streets. 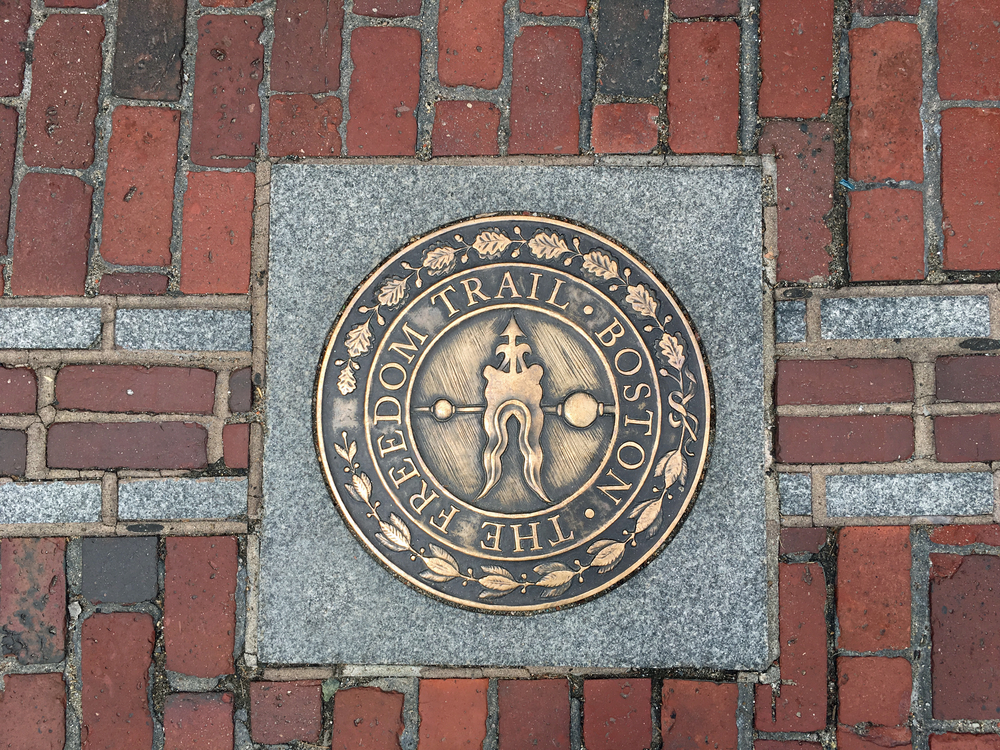 When the Big Dig relocated Boston’s elevated highways underground, the city found itself rich in prime urban land. Boston seized the opportunity to enhance city life by providing graceful parks and gardens to connect its oldest, most diverse and vibrant neighborhoods, including the North End. Today, the Greenway is often called the “front porch” of the North End.

When the Big Dig relocated Boston’s elevated highways underground, the city found itself rich in prime urban land. Boston seized the opportunity to enhance city life by providing graceful parks and gardens to connect its oldest, most diverse and vibrant neighborhoods, including the North End. Today, the Greenway is often called the “front porch” of the North End. 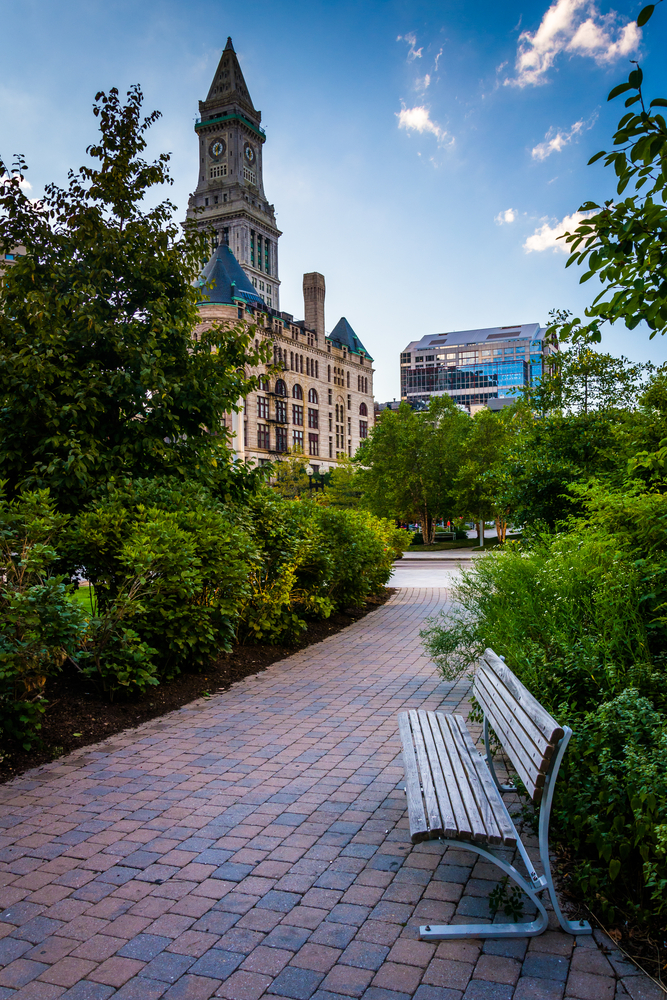 Built about 1711, is one of the earliest remaining brick structures in Boston. The house is an excellent example of early Georgian architecture. Its elegant symmetrical style was a radical change from the wood-framed Tudor dwellings, such as the Revere House, common in 17th-century Boston. The home was built for Moses Pierce, a glazier, and was later owned by Nathaniel Hitchborn, a boatbuilder and a cousin of Paul Revere. 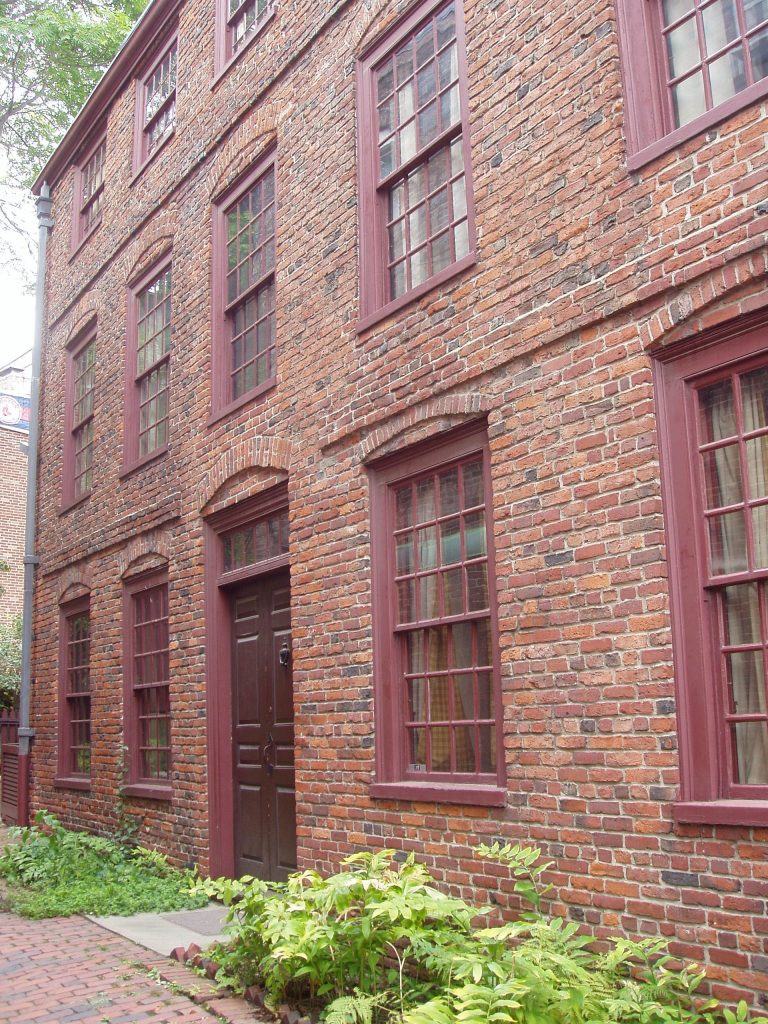 On the night of April 18, 1775, silversmith Paul Revere left his small wooden home in Boston’s North End and set out on a journey that would make him into a legend “Midnight Ride of Paul Revere.” Today that home is still standing at 19 North Square and has become a national historic landmark. Built around 1680, it is downtown Boston’s oldest building and one of the few remaining from an early era in the history of colonial America. 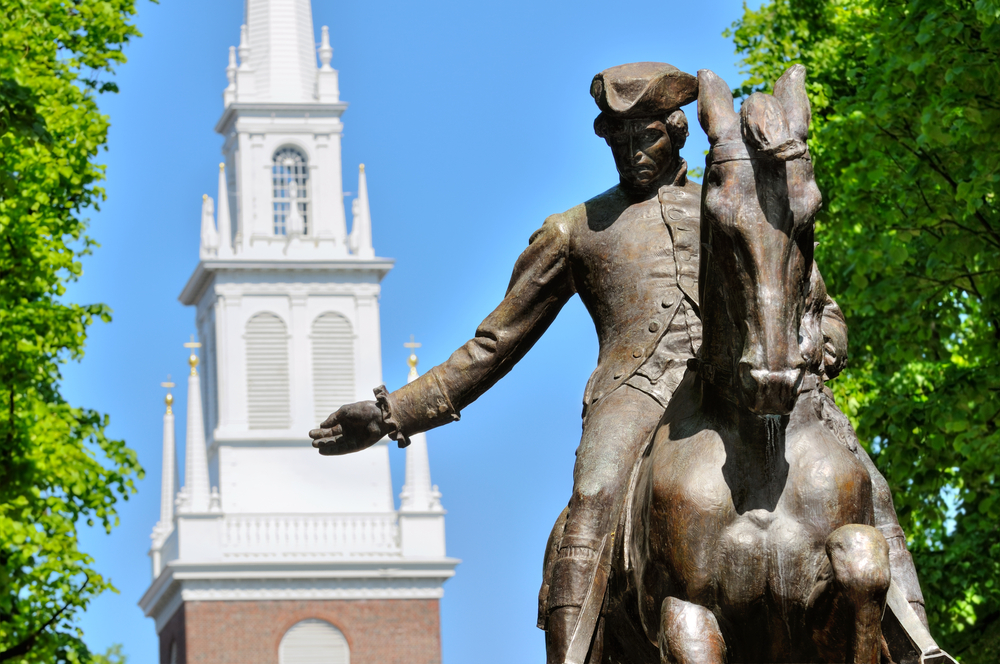 Formally designated a national church, it was started by immigrants to serve their community. National churches reflect the ethnic characters of their parishioners. Sacred Heart was built in 1888, largely by folks from Genoa. Later, the Genovese were joined by Sicilians, fishermen whose progeny still dominate the congregation. 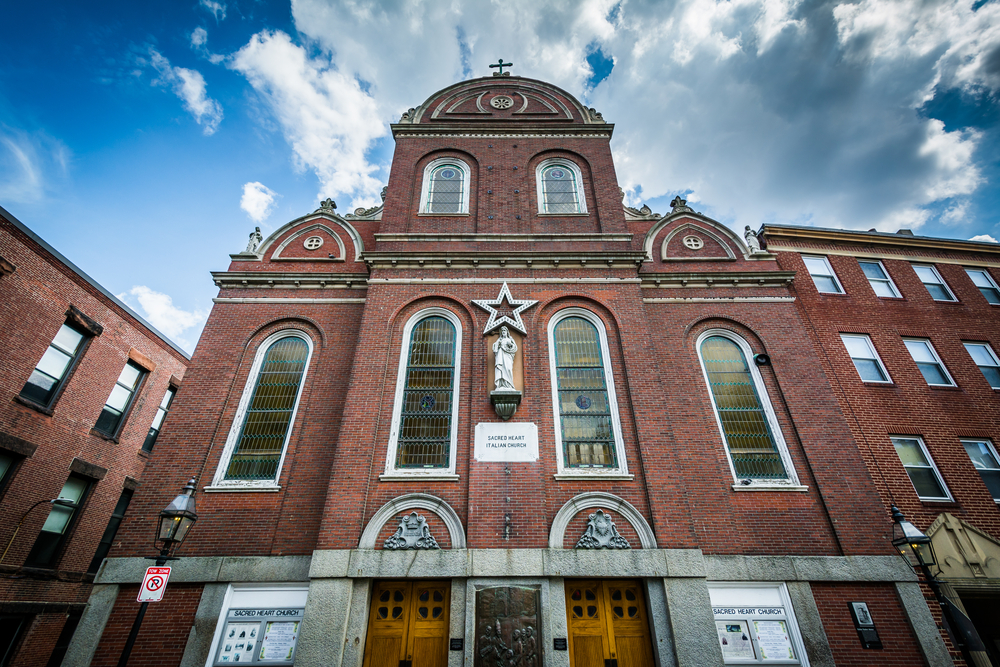 Founded in 1873, St. Leonard’s is the first Roman Catholic Church in New England built by Italian immigrants. St. Leonard’s is known to many visitors for its Saint Anthony shrine located in the downstairs church, the oldest shrine dedicated to the saint in Boston. The beautiful Peace Garden adjoining the church provides a serene haven in which visitors can escape the bustle of Hanover Street. 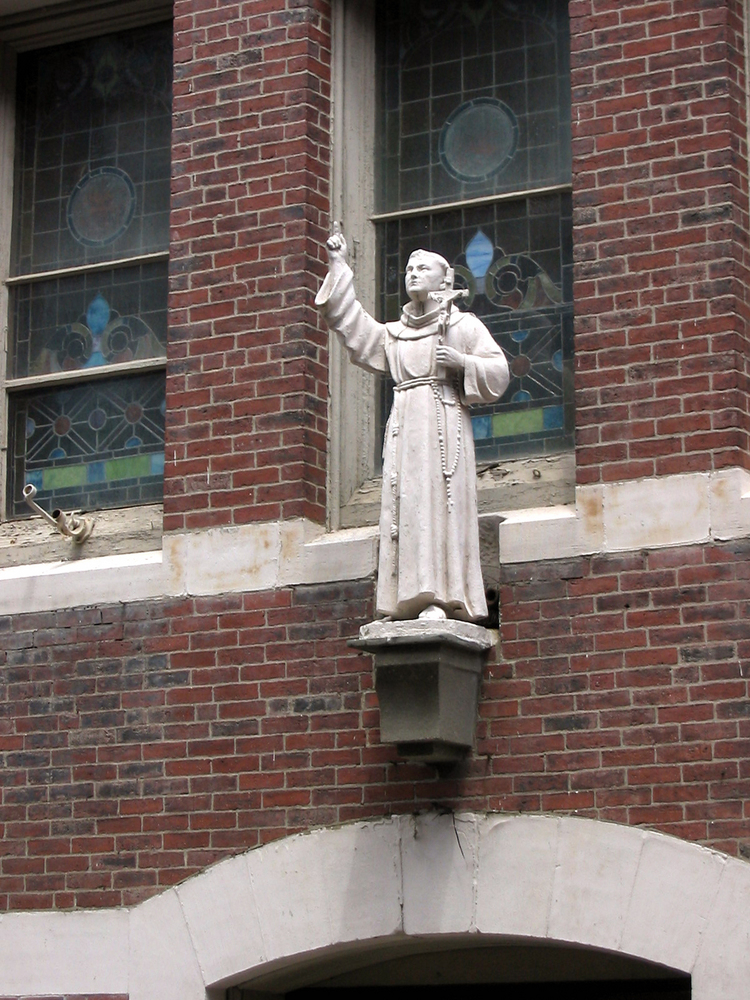 The Missionary Society of St. James the Apositle was founded in 1958 to serve the needs of the poor in South America by then Archbishop of Boston, Richard Cardinal Cushing. At the urging of Pope John XXIII, the Society evolved into an international organization of diocesesan priests who devote fi ve years of their priesthood to service in South American missions. 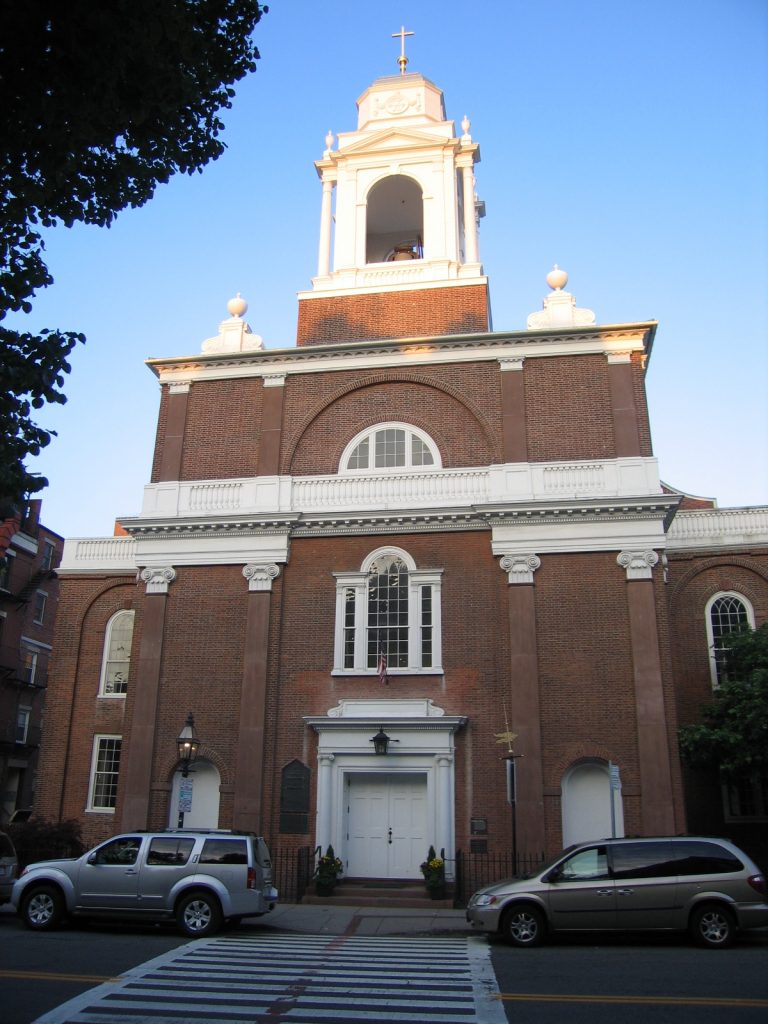 The Old North Church is officially known as Christ Church in the City of Boston. It was built in 1723, and is the oldest standing church building in Boston. The enduring fame of the Old North began on the evening of April 18, 1775, when the church sexton, Robert Newman, climbed the steeple and held high two lanterns as a signal from Paul Revere that the British were advancing to Lexington and Concord by sea and not by land. This fateful event ignited the American Revolution.

Boston’s second oldest burying ground, it was first founded in 1659, as Windmill Hill. The area got its name because a shoemaker, William Copp, once owned the land. Among others interred at Copp’s Hill are the Mather family of ministers, shipyard owner Edmund Hartt, and Prince Hall, the anti-slavery activist and founder of the Black Masonic Order. 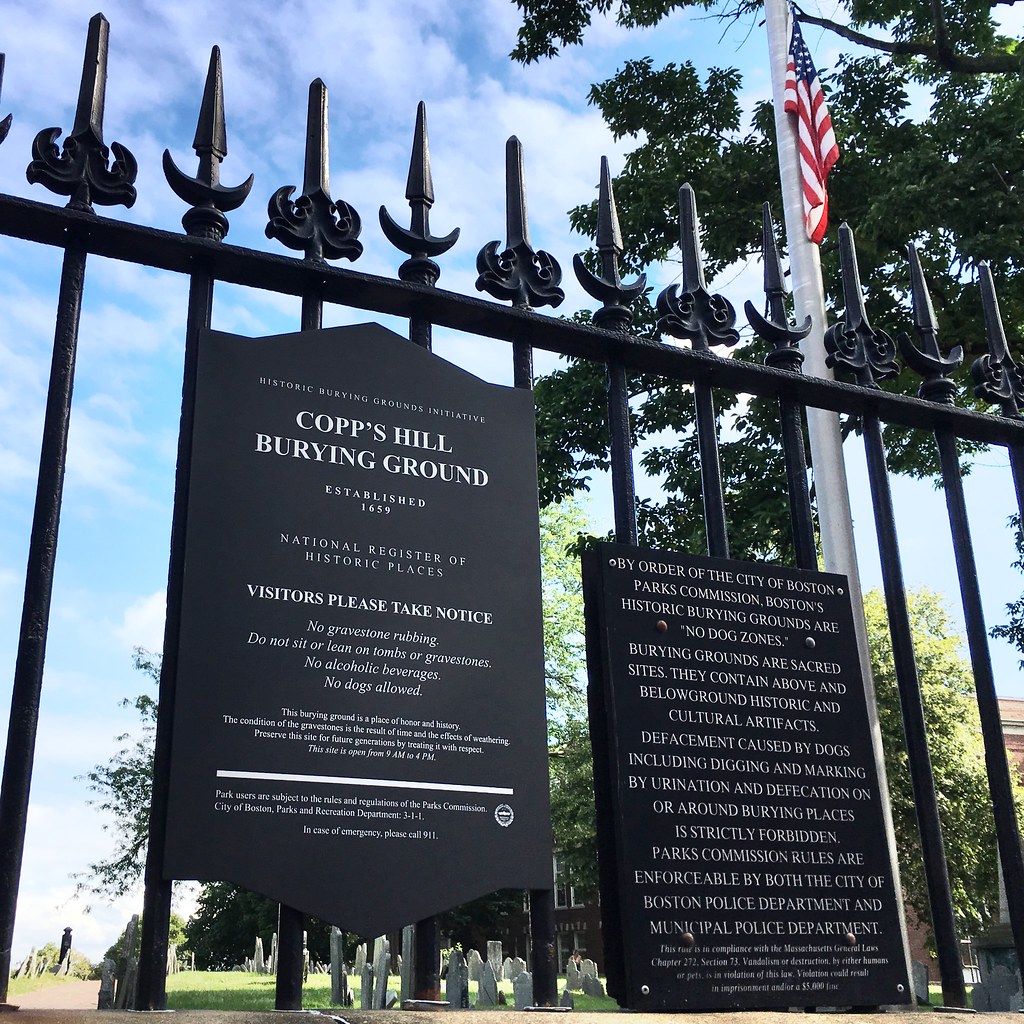 The Boston Molasses Disaster, also known as the Great Molasses Flood or the Great Boston Molasses Tragedy, occurred on January 15, 1919, in the North End. A large molasses tank burst and a wave of molasses ran through the streets at an estimated 35 mph (56 km/h), killing 21 and injuring 150. The event has entered local folklore, and residents claim that on hot summer days the sweet scent of molasses still fills the air. 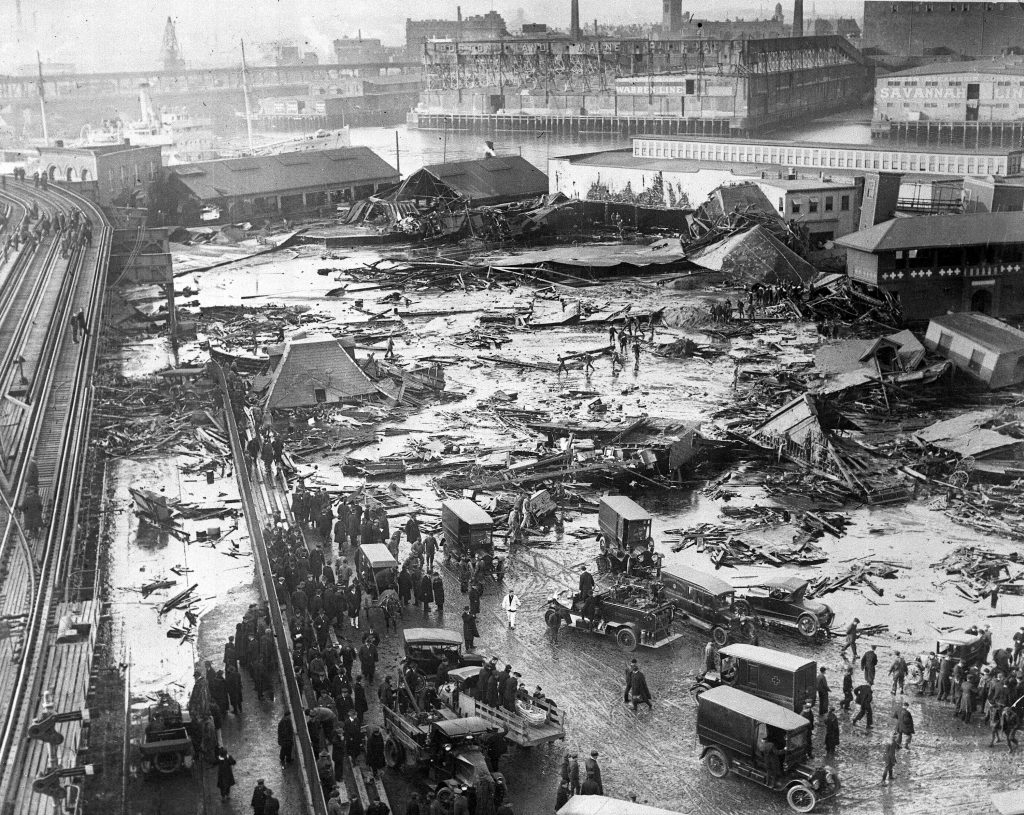 A Brief History of the North End

DURING COLONIAL TIMES, the North End was known as the “Island of North Boston”. It was a narrow peninsula reaching into Boston Harbor surrounded by water on three sides.

By 1750, the North End had become a commercial hub. Old North Church, officially Christ Church, was erected on Salem Street in 1723. As a teenager, Paul Revere rang the bell at the church. Revere, who lived and worked in the North End, is known for his historic ride to alert the Patriots of the British approach in the events leading up to the Revolution.

By 1800, the shipping industry drew thousands of mechanics, journeymen, and sailors to the North End and it became a thriving working class neighborhood. Since the 1800s, the North End has served a a home for immigrant populations looking for a better life. Each new group found a way to “become American” through hard work.

The Irish started arriving in the North End in 1815 at the start of the Potato Famine. Many Irish became laborers filling in Boston’s Back Bay area or working as servants in more affluent areas of the city. By the late 1870’s, the Irish population peaked and the North End began experiencing an influx of Eastern European Jewish immigrants. Salem Street became a thriving center of the Jewish community with kosher butchers, bakeries, delicatessens, and tailoring shops. The Italian masses flowed into the North End on the heels of the departing Irish at the apex of the Jewish settlement. The Italian immigrants made their living as fruit and vegetable vendors and a peddlers selling wine, cheese and olive oil. The Italians were also able to find work in the booming commercial fishing fleets and the construction trades, Today, the Italian-Americans still comprise more than 41% of the resident population and the North End still retains its Old World charm.